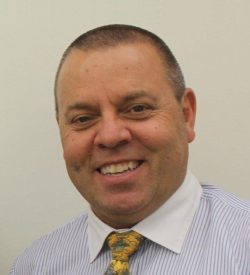 Peter is a surgeon specialising in the management of breast diseases.

He graduated from the University of Melbourne Medical School and completed his surgical training in Melbourne.

He then practised in the UK at the Nottingham City Hospital Breast Centre as a Clinical and Research Fellow. During that time, he completed a Doctorate of Medicine, undertaking a research project and thesis on biological changes in breast cancer. Peter then worked in the Mount Sinai Hospital in Toronto where he completed a Fellowship in Minimal Access Surgery.

In 2000, Peter received an award from the American College of Surgeons as the International Guest Scholar.

Peter is the Chairperson of BCRC-WA and with his breast surgery practice located at Hollywood Private Hospital, he provides surgical services to many BCRC-WA patients.

She went on to receive a fellowship in breast cancer/cancer genetics from Princess Margaret Hospital in Toronto. Then in 1997, she returned to Australia and practiced as a Consultant Medical Oncologist at Royal Perth Hospital where she stayed until 2002.

Arlene has been a breast cancer specific oncologist since 1999. Today, Arlene is an adjunct professor at the School of Medicine at Curtin University, the Director of the Breast Clinical Trials Unit (BCTU) at Hollywood Private Hospital and is Vice-Chair of BCRC-WA.

Arlene has authored more than 150 publications and spoken at more than 160 local, national and international breast cancer meetings.

The founder of Ertech, Jim holds a Bachelor of Civil Engineering and is a Fellow Chartered Professional Engineer of Engineers Australia. He has over 50 years’ experience in the construction industry.

Jim has led the successful development, diversification and financial performance of the Ertech Group of Companies from inception in 1981 until he retired as an executive director to become a non-executive board member in the final leg of his staged retirement.

Beginning his career as a medical scientist, Carmelo has spent the past 20 years in a variety of health leadership roles. He has consulted to some of Australia’s best corporate leaders and has held various board positions enabling him to cultivate an extensive corporate network.

His experience is in the public and private sectors in strategic planning, corporate governance, risk management and health service excellence and innovation, which all serve him well in his role at BCRC-WA.

Carmelo graduated with a Bachelor of Science (Medical Sciences) from Curtin University and has an MBA from University of Western Australia where he was a University Prize Winner. He was President of the UWA MBA Students’ Association and the Alumni Association.

Carmelo has always maintained a passion for clinically driven medical research making him a fitting leader for BCRC-WA.

David is a retired lawyer.

David’s wife, Yuki, was Prof Chan’s patient for many years. As with all her patients Prof Chan provided Yuki and all our family with the most exceptional care imaginable.

It is a privilege and honour to assist Prof Chan, and BCRC, continue her and its extraordinary work.

Debbie Bajrovic is an oncology pharmacist with a special interest in breast cancer.

She graduated from the School of Pharmacy at the Western Australian Institute of Technology (now Curtin University). Since then, she has gained extensive experience as a hospital pharmacist in the public and private sectors. She’s also practiced in WA and the UK.

Debbie has significant expertise in the cytotoxic compounding of chemotherapy and the preparation of biologics.

For many years, she practiced in clinical oncology pharmacy working principally with breast cancer patients enabling her to develop considerable knowledge in this field.

Debbie was Chair of the Oncology Nursing and Pharmacy Interest Group from 2009 to 2013. She has presented to professional colleagues both locally and nationally and is an active member of several national and international professional organisations.

Colin has more than 40 years’ experience in finance having worked predominantly in chief financial officer and company secretary roles in diverse industry sectors in both private and public enterprise.

As a consequence, he has a wealth of experience in strategic planning, corporate governance, risk management, costing, budgeting, forecasting and IT systems together with expertise in company secretarial practices.

Colin holds a Bachelor of Business and has also undertaken postgraduate studies in Information Systems and Company Secretarial Practices.